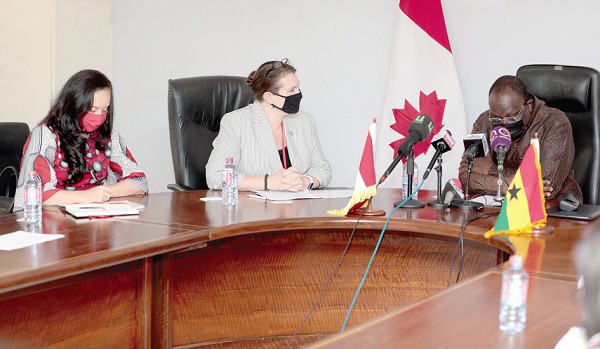 The Minister of Trade and Industry, Mr Alan Kyerematen, has proposed to Canada to explore the possibility of establishing a Ghana-Canada business council to promote trade between the two countries.

The council, he explained, would provide an opportunity for the two counties to deepen their engagement in the area of business and private sector development.

Mr Kyerematen made the proposal when Canada’s High Commissioner to Ghana, Ms Kati Csaba, led a team of officials of the High Commission to pay a courtesy call on the minister in Accra.

He said the strategic platform would address potential challenges in the commercial relations between the two countries, and facilitate trade and investments between them.

The council, he said, would further support the ministry’s ongoing efforts to identify business opportunities and other trade and investments related activities that could be exploited by private sector operators of both countries for the enhancement of bilateral economic, trade and investment co-operation.

He assured Canadian investors that Ghana was ready to serve as the entry point for Canadian investments in the sub-region to take advantage of regional market opportunities under the African Continental Free Trade Area (AfCFTA), which had an estimated market size of over 1.2 billion consumers.

Ghana and Canada, Mr Kyerematen said, had enjoyed close bilateral relations for over a century, with relations covering high level of cooperation in trade, investments, development, and humanitarian assistance.

Ghana, he said, intended to leverage the strong bilateral relationship between the two countries by making Canada a destination market for value added goods produced in Ghana under the Industrial Transformation Programme being implemented by the Ministry of Trade and Industry (MOTI).

Under the programme, he said, Ghanaian and Canadian investment partnerships in Ghana could benefit from Canada’s experience in vehicle assemblage and manufacturing of machinery and component parts, fertilisers and industrial chemicals.

The Canadian High Commissioner welcomed the idea of establishing a business council in Ghana to promote trade and investment between the two countries.

She congratulated Ghana on hosting the AfCFTA secretariat and playing a leadership role in its establishment.

Ms Csaba said AfCFTA offered opportunities for intra-African trade, and that Canada, a trading country, was looking at how it would benefit from the linkages and increase its trade on the continent.

She said Canada had over the years enjoyed good cooperation in the area of business and trade with Ghana, and was poised to expand its trading relationship with Ghana.

“We are conscious of Ghana’s initiative to move beyond aid and move towards more mature relations with other countries,” she said.

The High Commissioner disclosed that last year President Nana Addo Dankwa Akufo-Addo wrote to the Prime Minister of Canada, Justin Trudeau, outlining some specific areas where Ghana was looking for cooperation with Canada, particularly in the area of trade and investment.

The letter from President Akufo-Addo, she said, included a list of industries that offered good investment for Canadian businesses.

Already, she said, the trade team from the High Commission was going through the list and matching them with Canadian companies.

She said currently a Canadian company, under the one-district, one-factory programme of the Ghana government, was producing fire suppression technology, which would be marketed in Ghana and other African countries.

Ms Csaba said Canada and Ghana were engaged in forging investment promotion and protection agreement, but the processes had paused to enable Canada to undertake a full review of the agreement.

“The Government of Canada expects that companies will fully respect Canadian laws and the laws of countries they operate in, including respect for human rights and labour laws. There is a body that governs the behaviour of Canadian companies operating abroad,” she said.

Ms Csaba said Canada had increasingly focused its development activities around sustainable economic growth as part of ways of moving beyond aid relationships.

In line with this, she said, 70 per cent of Canada’s development portfolio was focused on inclusive development growth in the agricultural value chain, the development of micro, small and medium enterprises, and gender equality and women empowerment.