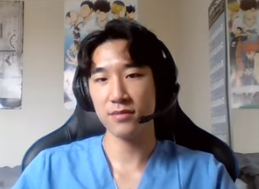 Aaron Yau is a second year student at the University of Waterloo School of Optometry and Vision Science. In late 2020 Aaron lost almost CAD $100,000 in a scam.

Aaron was born in Vancouver, British Columbia. His goal is to become an optometrist and in 2019 he was accepted into the Doctor of Optometry program at the University of Waterloo in Kitchener, Ontario. Before that he studied hard for four years, majoring in Biomedical Life Science.

While studying, Aaron also worked part time jobs for 15-20 hours each week to help pay for tuition fees, accommodation and general living expenses. With some extra help from scholarships and government loans he was able to get by.

Aaron gets a call from a fake parcel delivery service about a package sent in his name that had been flagged and held by Chinese customs authorities in Xi’an.

The fake parcel service told Aaron to speak to the Xi’an police to sort the matter out. Really what they did is connect him with another scammer on their team.

When Aaron communicated with the ‘police’ the scammers told him that he must cooperate with an ongoing investigation and should immediately fly to China to help. They said that his Chinese bank account was suspected to be involved in a money laundering scheme.

Aaron said he panicked at this point because he did not want to travel to China.

He set up a Skype account to communicate with the Chinese ‘police’.

For the next six weeks the scammers gave Aaron tips on how to protect his personal information from hackers. They also told him to check in with them four times every day, and to report any suspicious email or phone numbers.

Aaron said that at this point:

I felt safe and I felt like I was being protected.

A ‘police captain’ (really a scammer) took over the ‘investigation’ and advised Aaron that the police were investigating connections the money launderer had with Canadian banks. He asked Aaron to prove his willingness to cooperate by transferring money to a financial institution in Hong Kong that specialises in money tracing.

On the left is an image of a fake police ID that the scammers sent to Aaron.

To prove his innocence Aaron transferred CAD $12,530 from his personal bank account. Looking back on it, Aaron said:

I took all of the money from my accounts, all the money I had worked and saved to pay for tuition, and sent it to these criminals.

About two weeks after the first funds transfer the scammers, posing as Chinese police, told Aaron that the money was being processed, but they needed the money actually connected to his Canadian account. They told him to transfer $82,560 from his line of credit. They said they would return it in 1-2 months once the investigation into his case has finished.

At about the same time the scammers – now posing as Xi’an District Prosecutor – said they would tap his phone and monitor his internet usage to make sure he did not influence the investigation by communicating with any friends.

I was confident I could prove my innocence and I complied with everything the Prosecutor said. For the next two months they remained in contact. I reported my daily check-ins and they reported any updates to the investigation. Then it all stopped.

All contact from the scammers stops and the awful truth hits Aaron: he has been scammed out of almost $100,000.

At this point Aaron did the right thing by contacting the Vancouver Police, the Waterloo Police and the Hong Kong Police. He also contacted Scotiabank and the Canadian Anti-Fraud Centre. Unfortunately none of them could offer any legal help or financial compensation.

Scams have a huge impact on the lives and mental health of international student victims. Often the realisation that you have been tricked can lead to depression. If you lose a lot of money, you may not be able to pay for tuition or living expenses.

Both of those outcomes were true for Aaron. In January he said:

He also reflected on the very hard lessons he learned:

After talking to the Canadian authorities, I’ve leaned a lot about the red flags in my story. The call in general, the need to transfer money overseas, the absurd story. I see it all now. It sounds so stupid to fall for something like this but in the months leading up to it they manipulated me, and I am ashamed to say they had all of my trust.

He’s set up a gofundme page to help recover from this devastating scam and pay for his tuition expenses.https://au.gofundme.com/f/kykp9h-help-aaron/widget/medium/